A local school is being threatened with a lawsuit because they will only allow religion to be taught in the context of the humanities, and not as part of the science curriculum. How are we still dealing with this issue?

Now that we're done with the War on Christmas, and back to the War on Science, Reason, Logic and Facts, can I make a request? Instead of using the word "Bible" in speech or writing, replace that with "Christian Koran." Is it not correct to answer "What is the Koran?" with "Why, it's the Muslim equivalent of The Bible!"? It's identical in significance -- i.e. our holy book, which some of us believe contains the actual words of our Sky Friend -- but it makes a nod to the fact that the facts of the book are not facts the way REAL facts are facts ... they're opinions, particular to a region, like whether to use Miracle Whip or Hellman's (I'm sure Pence is more of a "it's got the word miracle in it!" than "the brand that looks both satanic and humanist" kind of guy). Refusing to do this would be to come right out and say "I know it's religion, and we have no evidence for any of it, but I am certain that these beliefs are 100% right and any other belief is 100% wrong, even if the other guy feels the exact same way, and I don't need evidence to rely on my gut and what I want to be true, no matter how much reason or evidence contradicts my adopted bias." At least you'll know where they stand on any debate about anything that might smite their biases, or put them on equal footing with the less-Reborn ... or even prove helpful to them, but be counter-intuitive ... and you will know they would want to make faith-based and data-free guesses about, say, existential threats to our country and planet. In other words, you'll know they shouldn't be let anywhere near policy.

Likewise, "Muslim Bible" works, and can be substituted -- in your own head if the speaker refuses to adopt this reasonable (hrrrm?) standard -- when you hear someone talking about denying rights based on religious preference, or bombing a part of the world because those people just don't count as much as we do because they are, simply, wrong about everything.

This concept genericizes. So when Betsy DeVos says that we should take away money from non-denomination public education to give to unaccredited faith-based schools, similarly unvetted telestudy programs, and home schooling ... what you should be hearing is: We want to replace fact-based education with Christian Madrassas, Online Radicalization, and Multigenerational Indoctrination.

Or, "No Arab Churches at Ground Zero." Or, "We forced Abu Ghraib prisoners to wipe their butts with the Muslim Old Testament (a.k.a. the Old Testament)." Or "Muhammed, people! Clearly, The False Lord of the Heathens wouldn't put the oil in the ground (with the 6000-year-old fossils ... um, I mean, Joseph Smith's Gold Tablets), if Vishnu didn't want us to Frack the Purgatory out of it!" Or, "I bet home schools come with a world religion course consisting of every Bible Belt Buddhist's favorite BC Christians: Jesus and Uzi."

Or simply, "I don't understand why we can't teach the Christian Koran as a science, side by side with actual documented events and demonstrable science." It's still semantically identical to "let us force-teach the Bible in schools" aside from taking away the "... because if you don't you're denying my first amendment rights to religious freedom" part, which is what these arguments so often devolve into. It intrinsically opens the door for teaching other religions on an equal footing, which is clearly not part of what these Pontif-icating-or-Protestant-ing Pastafarians (see what I did there?) are agitating for. It's clear that it's not simply "all religions are on an equal footing with science" they want, but rather "our religion trumps both science and other religions in truthiness." It's a harmless insanity, right until it gets control of the reins of government, and these semantic substitutions will help make the fnords audible.

Since the South is extra touchy about this subject, but not so concerned about traditional book learnin', I will permit them to refer to their Book as the Korrect Kristian Koran.


Remember: (A) Life (of gullibility, control-lust, illogic, sanctimony, and hypocrisy) begins at (the Immaculate) Conception. Please abort the coup of the born-again.
Posted by -b. at 6:23 PM No comments:

What's it Going to Take for You to Distrust Our Orange Overlord? (Tax 'Cut' Edition)

This is really addressed to the population of Republicants making less than 7 figures and with less than 8 figures of income to pass down ... in short, probably none of my (3) readers, but probably nearly the entire party.

If there were any question that this administration doesn't have the best interest of the people they appear to be representing, it's this graphic (courtesy of 538): 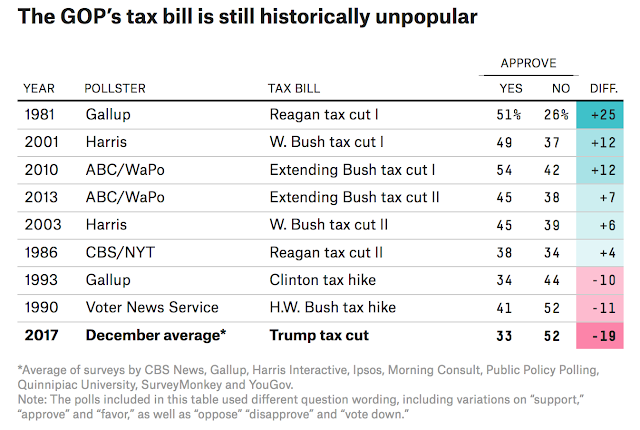 This "tax cut" is so wildly unpopular that it's less popular than the last two tax HIKES. And you can't tell me that the middle-class Republican base in the audience were happier about Evil Slick Willie's Huckster Tax Increase (which led to just about the only surplus in decades, yet again disproving Voodoo Economics, but we won't go there) then they are about anyone's tax cut.

But the point is not whether this tax cut will help you in the long run (it won't), or trickle-shrink the deficit (it won't), or even temporarily grow the economy (any more than printing $1.5T would). It's not even whether or not you've been con(vinc)ed into thinking it's good for you. The entire point is to hand out money to the people this administration is actually representing, which is the poor, put-upon Dagny Taggart types who go home and shower in clean, sequential bills every night, and would like to hire a few extra man-servants to vacuum up the dirty bills when they're done. This is nothing more than a pay-back for campaign contributions (and a promise of fresh ones) from the unfathomably rich, and an effective pay raise for the multimillionaires "representin'" you in DC.

Quick questions: what happened to "tax reform" and "code simplification"? Where's that postcard I'm going to be able to file my two (Mar-a-Lago golf course and Napa winery) deductions on? Tax reform and simplification sound like good ideas ... but that's never what this was actually about, and it's not even the optics any longer. And where are the Republicant deficit hawks that shut down the government(!) -- trashing our credit rating, costing us credit interest, and risking our standing as holders of the universal reserve currency -- over the debt ceiling debate (using that evil Democrat tool, the filibuster)? Once this bloats the deficit, I can bet those cockroaches will come back out of their cracks and start stripping away far more than they've given you, even if you're in the 6-figure bracket. Moral of the story: 100% of you simply need to shove your way into the top 1%, and then this government has your back (if you don't care about things like health, safety, public space, or existential threats to this country from a damn Twitter account).

But don't think you can't benefit from the new tax code (once you learn an entirely new tax code, which is not in any way "simplification"). For example, the Failing NYT makes this suggestion:

Imagine that you’re a wealthy person in the top tax bracket, and you own a genuine Rothko that has become worth millions more than you bought it for. Selling, you’d have to pay a huge tax on the painting’s increase in value. Instead, you could exchange the painting with a company you own for shares, a transaction that wouldn’t be taxed. Then, have the company sell the painting, paying only the new, low 21 percent corporate rate. If you pass the shares onto your heirs, they won’t have to pay any taxes on them.
Posted by -b. at 7:02 PM No comments:

Email ThisBlogThis!Share to TwitterShare to FacebookShare to Pinterest
Labels: Trump ... That Bitch

The Ducks are on the Pond


I haven't posted in a while because I keep re-approaching the Trumpoiska story, but the story is moving too fast to keep up with. Suffice it to say that there's no good reason for an entire cross-section of government -- from the Justice Department to military personnel to the spy services to foreign services (I'm looking at you in particular, Rex Tillerson) to presidential top aids, advisers, and campaigners, to family and business associates of the president -- to have so many ties to any one foreign government, never mind an enemy. Or to need to recuse themselves from investigation or plead the 5th or lie about their foreign ties. If you're OK with the president handing over state secrets about an organization in Syria (ISIS) to our military opponents in Syria, which is intel received from our "best friends" in Israel -- who are actually great at spywork but will think twice before they share any more info with us -- on the day he fires the head of the FBI without justifiable cause ("lock her up" and "he shouldn't have said anything bad about Hillary" don't fit in the same healthy cranium) while all of his cronies (and possibly him -- remember, he was wiretapped!) are under investigation for ties to Russia, and Russia's influence in the election which he won ... well, I'm not OK with you. Clearly, it's more about your side winning than the country and democracy winning, and I can't respect that political position. You can't burn it all down and call yourself a patriot, no matter how white and angry you are.

So, in the interest of posting something, here's some audio I captured from a local duck and goose farm. In the second half of the 15s track, you'll hear more geese being made. Insert your own Sitting Duck, Lame Duck, Goose is Cooked, etc. pun here.
Posted by -b. at 6:22 PM 1 comment:

Ironic, diagnostic or both?

I just noticed that April is autism awareness month.
Posted by -b. at 7:57 AM No comments:

Email ThisBlogThis!Share to TwitterShare to FacebookShare to Pinterest
Labels: Humor

But What Do I Know, I'm Just a Cow

In the mold of his other appointments (e.g. most outspoken critic of any agency to head that agency), it appears Trump has found a replacement for Nunes on the House committee investigating Team Trump's manifold Russia connections.